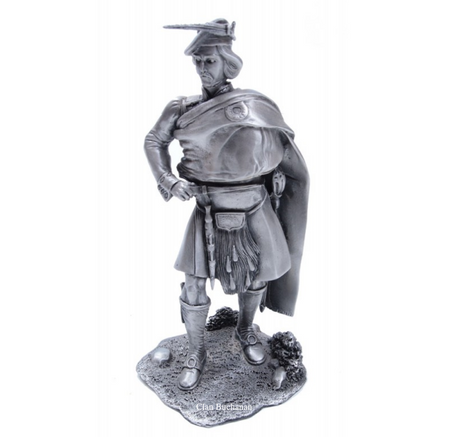 According to family legend, the family of Buchannan was descended from an Irish noble, Anselan O’Kyan or Ó Catháin, who was said to have settled in Alba in the late eleventh century, being granted land in the Lennox by Malcolm III. Around 1225, another Anselan was Seneschal (steward) to the Earl of Lennox and gained the island of Clareinch, on Loch Lomond. His successor, Gilbert, was the first to be called ‘Buchannan’. It may from the Gaelic Macachanonaich meaning ‘son of the canon’- suggestive of clerical origins.

“The figure is arrayed in a large loose plaid and philibeg; being two separate articles. The jacket, or doublet, is of the same fashion as that in the figure of Mackinnon, only buttoned and belted. The buttons on the jacket are peculiar to the Highlands. The sporran bears the Cath-ghairm of the clan  Clár innis. The hose, being cath-dath, are gartered high, and were sketched from a pair worn by Paul Mc Coll, a shepherd in the employment of Monzie. The bonnet is a small, flat one. The badge in the bonnet denotes the wearer’s clan; the two feathers, his near affinity to the Chief. The beard, to which the Celtic race was .so attached (witness the act of parliament to compel the Irish Gael to out it off), is from an authentic portrait of Rob Boy, in the possession of Herbert Buchanan, Esq., of Arden. It may surprise our southern readers to tell them that a Highlander thus habited in his dress eighteen yards of cloth!”