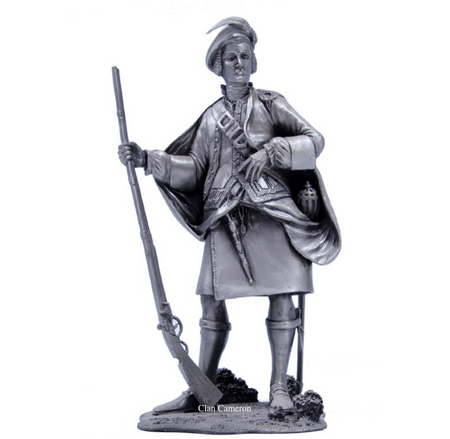 There are several theories concerning the origin of Clan Cameron. The old family legend states that they are descended from a younger son of a Danish king or prince called Camchron, however, no such king ever existed. The less prestigious theory is that the name comes from the gaelic cam-shròn, ‘crooked nose’, a possible descriptive nickname for an early chief. More likely is that the name came from a family who took their name from a place they once owned, Cameron in Fife (cam-brun, ‘crooked hill’). The earliest of this name that can be traced is the thirteenth-century knight Adam of Kamerum and his contemporary (and possible relation) Robert de Cambrun (spelling being woefully inconsistent back then), who was granted the lands of Ballegarno by William the Lion. Royal service bought them to the Highlands, where the family is now most associated.

“The figure represents a young man dressed in the style prevalent in the middle of the last century, when wigs were in use. The chief garment is Breacan, which is worn in the mode usually termed the balted plaid. It is of the pattern claimed as the appropriate sett. The hose are ca’ da’, or formed of cloth of the tartan worn by the 79th, or Cameron Highlanders, which is a design furnished by Sir Allan Cameron of Errachd, who raised this distinguished corps in 1794. The gun is based on one of those taken from the Highlanders in the two last rebellions, many of which were preserved in the small armory in the Tower, now destroyed. It is of Spanish manufacture, as most of the Highlanders' muskets formerly were. The sword is from a fine “Andrea Ferrara” the property of Henry Longlands, Esq., Charlton, Kent”.