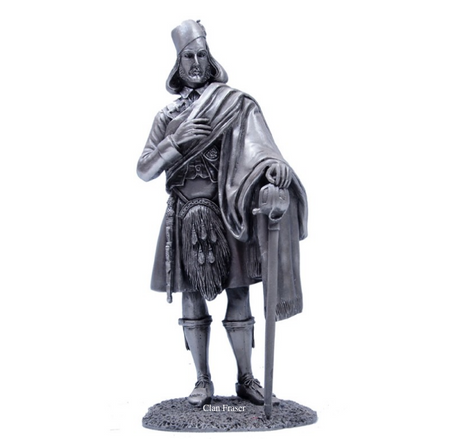 There are two Fraser clans, one Lowland and one Highland. They share the same origins, and between them have spawned many Fraser branches throughout Scotland, and hence all around the world. The Frasers originated from Anjou in France, and the name derives from either Fredarius, Fresel or Freseau, all being places nearby.  The chief of the Lowland branch uses the strawberry plant in the chief’s arms, which is ‘canting’, a type of heraldic pun, on fraisiers, the French for Strawberry. The Frasers first appear in Scotland around 1160, when Simon Fraser held lands at Keith in East Lothian. The Frasers had probably come to Scotland with King David I, when he invaded Scotland from England to claim his dead brother’s throne.

‘The only peculiarity in this illustration is the hair: the prints in Burt's ‘Letters from the Highlands’ of 1725, represent the Gael of that period, wearing it much in the fashion here shewn. The bonnet is called ‘a Glengarry’; its present form not more than forty years old, and has been adopted by many as an improvement, but is only an imitation of the lateral cock of a flat bonnet carried round, with a slit behind for convenience to pull it forward. The badge and two feathers denote a person of consequence: the kilt and ample shoulder plaid have been shewn in former figures. The hose are knit, and gartered low, which, as a matter of taste, is generally preferred.’

Another interesting feature not described by McIan is the Drik, hung near the sporran. This has two little side pockets and contained within are a miniature knife and fork.