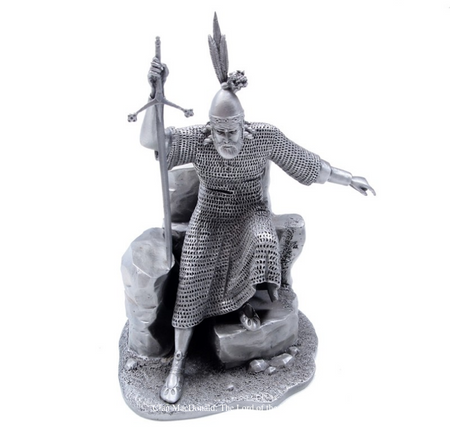 Clan MacDonald: Lord of the Isles

The Lordship of the Isles dominated the Western Isles of Scotland during the middle ages. Emerging from the fusion of Gaelic and Viking cultures under Somerled, the Lords of the Isles descended from Somerled (d.1164). They utilised the iconic Birlinn, an adaptation of the old Viking Longships, although with an additional rudder. The Lordship was extinguished in 1493 by James IV. From Somerled and the Lords of the Isles descend the famous Macdonald, Macdonnell, Macrory, Macalister and Clan Macdougall.

McIan describes his illustration thus: "The figure represents one of the Lords of the Isles sitting in judgment on the Tom Moid, or law hill, in Eillean Gomhairlich, with his barons around him. He wears the habergeon, or shirt of mail, which an old writer describes as being "side almost to the heels." This was the usual defensive armour of the Highlanders, who continued its use until a late period. It is called Lurich, and it is observable, as an etymological fact, that the Lorica of the Romans, a similar body armour, is said by Yarro to have been derived from the Gauls! Underneath, the sleeves of a leather doublet are seen, and the legs and arms exhibit the appropriate Breacan of Lord Mac Donald. The Glogaid, or skull cap, is of the form worn by the old Gael, and seen in their effigies at the sacred isle of Columba and elsewhere. It is fastened under the chin with a cord of twisted leathern thong, for which there is authority in a rare French work on costume. As a regal head-piece it is ornamented with a circlet of Cairn-gorm stones, or topazes, and the “eagle's wing”, which Ossian tells us distinguished a chief, is fixed on the apex amid the badge of lovely heather. The sword represents the old Claidheamh of the Highlander."